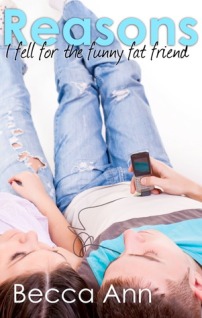 Blurb (from Goodreads.com):
It’s stupid to fall for your brother’s ex. It’s even worse to enlist another’s help to win the ex over. But Brody is desperate and Hayley, his partner in American Sign Language, is more than willing to lend him a few tips.

She’s the school’s matchmaker,’ and with her bizarre and positive personality, Brody finds her easy to talk to, even about the most awkward situations. Hayley’s tips seem to be working, but as Brody learns more about his matchmaker, he starts finding reasons to spend time with her, and not the girl he thought he was in love with.

But Hayley isn’t ready to fall for anyone. Labeled the “Funny Fat Friend” within her group, her self image makes it impossible for Brody to share his feelings without Hayley shrugging it off as a joke.

Convincing her Brody can, and did, fall for the “Funny Fat Friend” turns out to be harder than simply falling in love.

My Review:
After being in the supernatural world for a bit, I decided I wanted something light and fun and normal to read. What better author to turn to than Mrs. Cassie Mae?

What I Loved: This book was exactly what I needed. It was a sweet romance with likable, real characters who were goofy and down to earth. I loved that this story was told from the guys perspective, which is always a little refreshing, despite me wrinkling my nose every time he talked about how badly his bedroom smelled (at least he was aware of it!). Hayley was pretty funny, and a lot cheesy, but I could tell the person she was meant to be right off. I’ve met those people who seem so incredibly self-aware and confident, who are easy to talk to and know how to keep conversations moving, yet have something going on underneath. I could see why Brody would have a hard time understanding her reluctance to believe that he actually liked her.

Not So Much: Part of me is happy that Hayley’s home life wasn’t as bad as I had originally thought, at the same time I kind of felt like that part of the story was a little underdeveloped. It could have been me wishing to get into Hayley’s head (since I’m used to the girls being the narrator) but I kind of wanted more there.

As always a great read! There is mild cussing, and there IS non-descriptive sex in this book, so older YA would be my recommendation.