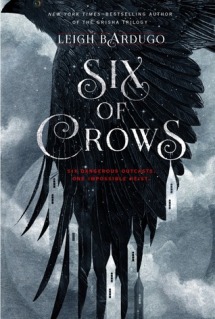 Blurb (From Goodreads): Ketterdam: a bustling hub of international trade where anything can be had for the right price—and no one knows that better than criminal prodigy Kaz Brekker. Kaz is offered a chance at a deadly heist that could make him rich beyond his wildest dreams. But he can’t pull it off alone…

A convict with a thirst for revenge.

A sharpshooter who can’t walk away from a wager.

A runaway with a privileged past.

A spy known as the Wraith.

A Heartrender using her magic to survive the slums.

A thief with a gift for unlikely escapes.

Kaz’s crew are the only ones who might stand between the world and destruction—if they don’t kill each other first.

For the last couple of months I’ve been doing Instagram photo challenges (this month, search #marchbbpchallenge to find our posts!) and last month one of my friends who was doing the challenge was posting a lot about Six of Crows, and really talking up this book. I had looked at the summary more than once, but based on her recommendation I decided to get the audio book to listen to it at work. In the beginning they always list out the narrators, and when I heard that there were four of them I knew I was in for an involved book.

I was so not ready, and that the first time I tried to listen to this book I got lost in everything that was going on and all the characters. I think it may have also been a particularly busy week at work so my concentration was broken at best. Sometimes I can listen to a book in these times, sometimes not. This is why I do a lot of frequent re-reads,  it’s much easier to listen to a book I’ve already read during work. Anyhow, I stopped listening to this book in February. Last week I decided to start over and give it another go. (Side note: while it’s possible, Audible isn’t exactly thrilled when you listen part way and then start over again later. Until I finally got past my previous stopping point, any time I had to pause the book it would hiccup and I had to go re-find my place). My second time through was MUCH more successful, I mean clearly since I’m writing a review, right?

What I Loved: This book reminded me of the TV show Gotham in the first few chapters, with the discussions of who controls what part of the city, and things like that. Then as it took off, it reminded me of Oceans 11 with the gathering of a team of some-what misfits who may or may not have liked each other. So Gotham + Oceans 11 + paranormal = Six of Crows. There are so many different elements to the story, it was so involved that at first I wasn’t 100% sure that I liked it. However, the further I got into the book, the more I liked it and the more invested in the characters I was.

Once I got into the book, I really loved nearly everything about it. All of the unique personalities, the background of the characters and their relationships. I loved the teasing and banter between everyone. This book had twists and turns and surprises all the time, so it kept me on my toes. I really enjoy that. All of it made for an amusing three days of work! Or at least 2 days, once I got past the “eh, I’m not sure” ’s.

Not So Much: This book was so very involved, with overlapping back stories, and twists and turns that listening via audio while at work was pretty difficult. Add in the fact that there were 4 separate narrators, it just wasn’t an ideal reading situation for a book like this. It is for this reason I purchased an actual copy of the book. I did love the story, but I feel like there were so many details I missed because my attention wasn’t 100% – and it never is going to be when listening to an audio book – at least not for me.

This is my fault, but I think I might have gotten a lot more had I actually read the first series as well. I’m pretty sure this isn’t a continuation, but I do get the idea that the world may be close to the same.

So good. When I was describing Six of Crows to my husband, I told him that one of the things I really liked was I didn’t think this book was ‘geared toward a female audience’ but is much more broad than that. I believe that any guys out there who like to read would enjoy this book as much as any girl. That isn’t to say that they don’t enjoy the other series (Hunger Games, Divergent…etc) but I feel like there is just something about some of these fantasy/sci-fi/Dystopian type books that just has a shift toward more of a female audience….granted, that is probably accurately done since I think that is the biggest audience.

I recommend this to anyone who DOES like those previously mentioned books, but also to anyone who likes action – if you like the TV show/movie I mentioned as well I think that you’d enjoy Six of Crows. It is a YA novel – and does have some mild cussing.