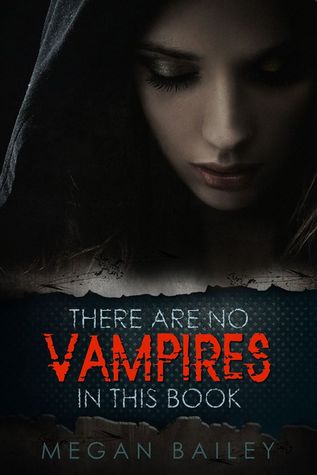 Title: There are No Vampires in This Book
Author: Megan Bailey
Genre: NA – Fiction

Synopsis:
TARYN HAD NEVER BEEN NORMAL.She wasn’t like other girls- not after that night, that thing, took her parents from her. She made it through hospitals, doctors, and therapy by playing by their rules and saying all the things they wanted to hear. But, inside, she held on to the truth.
She knew what she saw.

SHE SPENT HER TEEN YEARS PREPARING IN SECRET
With her two closest friends at her side, she dedicated herself to a mission. She would train and she would hunt. When the time came, she would be ready. No one she loved would be hurt by one of those monsters ever again

But with high school behind them, new found freedom comes with new responsibilities and new problems. Instead of weapons and self defense classes, she now has jobs and bills. The relation-ship with her best friend was suddenly shifting into new, scary territories. How could she take down bad guys if she couldn’t get her own life in order?

AND THEN THERE WAS HIM.
A mysterious stranger who pops up in suspicious places and throws off all sorts of bad vibes. His face now starred in her regular nightmares and plagued her thoughts in the day. Was she overre-acting? Or, was this finally the monster she had been waiting for? As the scars of Taryn’s past rise up to haunt her, she begins to question herself. With her mission faltering and her friendship off kilter, would life ever be the same again?
Would she ever be the same?

This is a book that was recommended by another blogger, and that was chosen by a group of us lovely blogger-people to read together. (You can find their reviews linked at the bottom!) I loved the idea of reading a book together and all posting a review. It’s even better when the book that is picked out is a good one!

What I Loved: I loved that this book wasn’t exactly predictable. I’ve been reading so many books lately that are lovely and wonderful but from the beginning you kind of know where it is going to go. It’s not that books like that are bad. In fact, I find sanctuary in those easy read kind of books at times, but I love it when one jumps out at you and keeps you guessing. I enjoy that it keeps my mind active, ‘what’s going to happen – perhaps this or that.’ This was true all the way up until the last chapters of the book, I was pretty sure I knew what was going to happen – and still yet there was that lingering thought that the author could throw me for a loop.

I loved the friendship bond in this book, and let me tell you it was quite a bond. The three of them were actually quite different people, but their dynamic worked so well. I loved the idea of just hanging out at home eating pizza and being goofy – is that even acceptable anymore? It seems like people always have to be doing something!

Not So Much: At first I had a hard time switching from first person journal entries to third person story – I got over it pretty quickly, but it sometimes had me thinking, ‘wait what?” or “why is she referring to herself…oh that’s right…” While I DID get over it – there is a part of me that wishes that it would have been told in first person, because there were questions regarding her parent’s death that I wanted answered as a third person perspective that in first person perspective would have been easier for me to let go.

I really, really enjoyed this book. There was sufficient action, and mystery. There was the internal battle without having the sullen or moody vibe about it. I loved Taryn and her desire to do what she thought was right, as well as facing her fears. At the end of the book she said something about how the new her faced her fears, but I felt like she was doing that all along. This book is clean, and I’m not 100% sure if it’s because I was engrossed in the story and forgot to pay attention, or because there just wasn’t any – but I don’t even recall there being any cussing. There is alcohol – but the book is NA, and I recommend it for such. I do look forward to reading more from author Megan Bailey, as I enjoyed the adventure she took me on.

About the Author:
Megan Bailey is a novelist and short story author. When not writing, she loves playing video games for way too many hours and reading everything she can get her hands on. Megan is married to her own wise-cracking, romantic hero. They live in Central Illinois with their two devious/darling daughters and three furbabies: Minna the boxer dog, Logan the black cat, and Gimli the dwarf bunny.
Advertisement

4 thoughts on “Book Review: There are No Vampires in This Book – Megan Bailey”