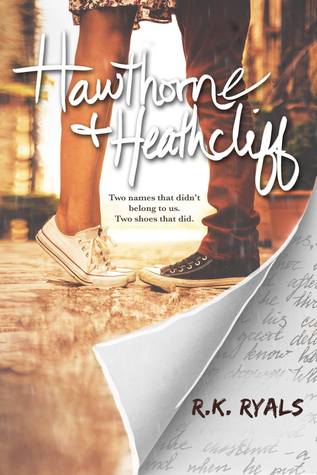 Two names that didn’t belong to us. Two shoes that did.

Intense and introspective, seventeen-year-old Hawthorne Macy knows all about being abandoned. She’s felt the stark pain of being left behind by the people who are supposed to love her the most; her parents. Raised by her caring uncle on an old plantation, Hawthorne lives her life on the fringes of her small Southern town.

Until she meets his shoe.

Senior year, last period English class, and a pair of silent tennis shoes resting next to hers in the back of the room throws Hawthorne into a world she’d learned to stay outside of.

His name is Max Vincent, but in her mind, he’s Heathcliff. The handsome eighteen-year-old boy behind the shoes will pull Hawthorne into a passionate and unforgettable adventure of self-discovery during a time when love seems impossible.

My Review:
Hawthorne & Heathcliff is the perfect example of social media advertising at it’s best.  I have never read one of Ryal’s books previously, and I’m not even sure how she started pulling up in my newsfeed – could have been a result of me liking random pages via one of those “post your page here” posts, who knows.  What I do know is that the cover for the book started showing up, and it appealed to me very much.  Sweet an simple, and more often then not, the kind of cover that appeals to me the most.  Once I read the synopsis of the book I kind of knew I would read it eventually.  It was during the H&H themed shoe contest when I finally pre-bought the book.  It just goes to show, you generate enough buzz an hype on a book, you will get people to bite.

What I Loved:  Although in many ways the writing is poetic, not in the rhyming way, but in verse, Hawthorne & Heathcliff is very real.  The reality seeped through the seams with love and grief.  My story is so different from Hawthorne’s, but I can relate to how stand-offish she was, and the hesitancy to let people in.  I also relate to her being forced to grow up and understand the realities of life beyond the thoughts and cares of most teenagers, while simultaneously sort of wanting that kind of innocence/freedom to care about nothing more than your hair, clothes and the boy you like.  I was drawn to her just as much as Heathcliff (Max) apparently was.
I loved the growing relationship between her and her uncle, and how because she was afraid to ask, there were so many assumptions that Hawthorne made about herself that just weren’t true.  This book was a different kind of ‘coming of age’ novel.  Normally the teens in this kind of novel are maturing and realizing the things that are important in life.  Hawthorne is discovering who she is, crawling out from under her issues and looking at life in a different light.

Of course the relationship between her and Heathcliff was such a steady burning flame throughout the book, just the kind of romance I love to read.  I enjoyed how Heathcliff was both persistent and patient with Hawthorne, and how eventually the roles reversed.
Not So Much:  I’m not a huge fan of sex in novels, especially with teenagers.  This is not a surprise to any of my regular readers.  I wasn’t sure if this novel would or would not have it, it’s hard to say sometimes.  However, there was a little in this book, and it was mostly emotionally based in description, but there were a few visuals (which is where I sort of draw my line).  However, I will say that as teenagers, Hawthorne and Heathcliff were very mature about it, there was discussion and protection, and it was based in reality and not this all amazing, perfect experience.  I respect that much more than glamorizing the entire experience.
Rating: 5 Stars – Sometimes a beautifully written novel with words like lyrics is exactly what I’m looking for.
Rated: R – due to sex and cussing (remember, I try to do this based of movie standards! 🙂 )
P.S. I still wish I would have won those amazing shoes!  I hope the winner loves them!  🙂
Advertisement