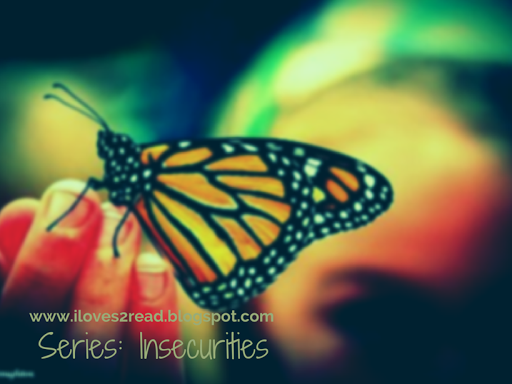 This is a new series on insecurities.  This idea was born out of some observations I’ve made of myself and the ladies around me, when it comes to who we are and how we feel about ourselves and how we feel others see us.
When I was in High School I was kind of a wallflower.  I was in Marching Band and that in itself is a unit, so it wasn’t like I didn’t have friends, or hang out with people, I just always felt a bit on the outside of everything. I was friendly, and I’d like to think I was kind to everyone, I was just quiet and kept to myself.  In fact, I have had people who have seen me in recent years who say, “I remember you from school,” and it shocks me to realize they knew I even existed.

When I had my first real boyfriend (not just the kind in name only, but the kind where we spent quality time together, got to know each other; the relationship had a foundation), I was extremely self conscious. I was a senior, and I had very little “good” relationship practice (divorced family with a father who was living in another state doing his own thing). I felt like if he wasn’t spending every moment with me or thinking about me then the whole relationship would crumble.  I would find myself in distress and crying a lot – all of my distress was mental, nothing he was actually doing to me.  His friends thought I was pathetic and had taken to cyber-bullying me (before cyber-bullying was really a thing). I had this feeling that even though I professed to love him, that the entire thing was just going to fall apart.  And it did.  But mostly because I couldn’t let him be HIM, or let him breath a little, so he became bitter toward me, and I imagine at some point everything about me had him internally cringing.  I was THAT girlfriend.

I met my now husband, Justin, pretty soon after my ex and I broke up.  To be completely honest, even though I was very attracted to him, I was not ready for another relationship after the epic fail of the last…but there was just something about him.  We hung out with mutual friends for about three months before we officially started dating.  The difference between Justin and my ex was this:  my husband thought I was beautiful, and told me frequently.  He was patient with me when I went psyco-girlfriend on him, and took time to reassure me and explain to me plainly that I was being unreasonable (as oppose to the eye-rolls and scoffing I got before).  He genuinely loved me, and that brought out a self confidence in me that I didn’t know I was capable of.
Still yet, for many years I had a hard time dealing with people I didn’t know one-on-one.  I suck at carrying on a conversation with someone I just met (yet, if you don’t figure it out, then how do you get beyond that ‘just met’ stage?).  At some point someone told me they thought I was kind of a snob because I didn’t really talk to people, when reality is that I just had no idea what to say.  I talked to Justin about this, and we discussed the bible verse: A man who has friends must himself be friendly, But there is a friend who sticks closer than a brother. (‭Proverbs‬ ‭18‬:‭24‬ NKJV)
I have now read this verse in a few different versions and contexts, and while I’m not sure that the above is the most accurate of translations, at the time it rang true for me worded just as it was.  It was convicting to me to know that if I was having trouble connecting with people, it was because I wasn’t being friendly.  Not that this was news, I KNEW I was bad at it, but the verse convicted me in a way that caused me to desire to change for the better.  I wanted to be friendly, so I had to get out of my comfort zone and learn to connect.

A few things that I learned along the way that helped:
1.  While there are many types of people/personalities, we all have similar insecurities.  Rejection is always one of them.  There will always be people who reject you, but usually this isn’t personal, and it really could be that said person needs/is learning the same lesson I had to.

2.  People want you to be genuine.  If you ask them about their day, listen to them talk about their day.  (And if they didn’t have a good day, they probably aren’t really looking for advice).  If someone asks you about your day, tell them.  Not every detail, and this isn’t a chance for you to complain about everything, but if it sucked, it’s okay to say so.

3.  You have to truly want to connect with someone in order to do it.  I had to overcome this obstacle.  I was afraid of letting people in because in the past I had been betrayed (father left, and years of broken promises), I had been bullied (Cyber-bullied, and to my face), I’ve had people be overly honest about my appearance (we couldn’t afford the hippest of clothes, and I had no idea how to ‘girl,’ make up, and doing my hair was completely foreign to me).  Regardless of all these things, I was shielding myself from future hurts by not letting new people in thus pre-judging them based on my past.

4.  The bible says that we are to “Love your neighbor as yourself…”  which implies, if we love our neighbor, we must first love ourselves.   – I will be touching more on this in future weeks!

I took a long time to get to the point where I felt like I could walk up to someone and be able to carry on a conversation that didn’t make me seem weird or awkward, and to be honest it still causes anxiety in me.  It is only because of some of my closer friends telling me that I don’t seem awkward or as nervous as I feel at all to realize that I had truly gotten better.  But the rewards of my effort far outweigh me being nervous or feeling like a conversation did not go very well; I have had moments where people have told me that having me walk up to with a smile and a friendly word encouraged them, or made them feel more comfortable.  I have also made several lifelong friends, while historically I would have one really good friend in my life and several acquaintances that I never got close with.  I’m introverted, I like to be alone at times, I find large crowds overstimulating; but my life is more enriched, fuller, and happier with more friends in it as well.
Advertisement

3 thoughts on “Insecurities, Week 1: Confessions of the Wallflower”