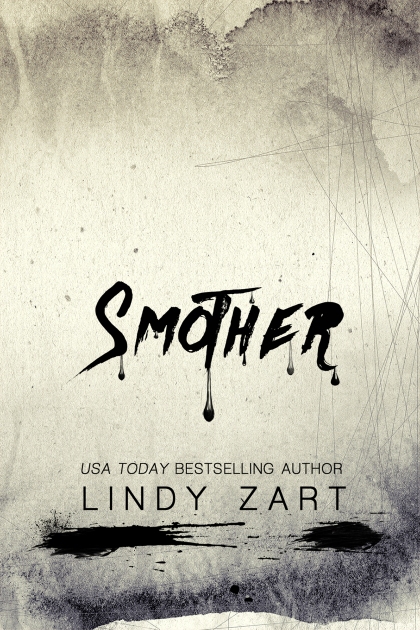 Blurb:You won’t like me. I am not the nice girl. I am not your friend. I don’t care about you, but most of all, I don’t care about me. Go ahead, hate me. We all have secrets. I have them as well—dark, terrible secrets. The only time I can breathe is when I forget. I need to be numb. You don’t want to know how. But as long as I can breathe, the past cannot smother me.

Smother Release Day Party Link: https://www.facebook.com/events/845546405543761/
Excerpt:
When she reached the door at the back of the shop, Reese tried the doorknob, not really sure if she would find it locked or unlocked because she’d never tried it before. It wasn’t locked. She blinked, surprised that her confrontation wouldn’t be delayed. Then she pounded up the steep carpet of stairs and stared at the white door at the top of them.
Out of breath and heart pounding so hard she felt it through her chest, she raised a fist to the door and went to town, banging all of her frustration into the woodwork. It flew open and the air was knocked from her lungs for another reason entirely. Her mouth went dry and she swayed backward, Leo’s quick grab saving her from a fall down the stairs.
He yanked her into the apartment by the front of her shirt and kicked the door shut behind her. Then he crossed his arms and stared. She was staring as well. Reese had never seen him without his shirt on. She couldn’t pretend it wasn’t a notable sight, or that her body didn’t respond to it. His shoulder muscles alone were impressive, but then there were the cuts to his biceps, the chiseled pecs and abs, all covered in black ink.
Reese tried to swallow and couldn’t. She stared intently at the artwork, wanting to decipher it. She decided she’d need her brain functioning better than it presently was to attempt such a thing. Big muscles were not her thing—she was prone to go for lanky, lean frames. That tidbit was forgotten as her eyes went up and down the tattooed body before her. It was impossible not to appreciate the beauty of it.
Leo was the equivalent of a dark warrior on an unending, unknown quest, regardless that other than the ink that stained his upper body, there was nothing dark about his looks. From his light brown hair to his gray eyes to his pale skin, he should be forgettable, but there was more to him, something that made him stand out. It was an inconsistency, like all of him, and all of her. And the two of them.
“Better be good,” he growled. “Not even eight in the morning.”
“Funny, I pictured you as a person who got up at the first sign of dawn to not be wasteful of any second of daylight.”
“Thought wrong.”
She forced her eyes from his body and up to his light gray eyes instead—the eyes that judged her from the recesses of her mind when she least wanted. She went on the defensive as she remembered why she was here. “I don’t appreciate you having people check up on me. It’s none of your business what I do or don’t do.”
One pale brown eyebrow lifted. “No smoking in the building.”
She sputtered for a bit before she could get words out. “I wasn’t smoking in the stupid building! And if that isn’t the most lame ass answer I’ve ever heard of for trying to justify having me hauled from a party! I was drinking. I’m twenty-four. I can drink. Unless there’s a rule against that too?”
Reese poked a finger against his hard chest and tried not to get distracted by the smoothness of it. “You may own the apartment building I live in, but you don’t own me. Don’t do that again.”
She spun away from him and reached for the doorknob when he said quietly, “If you can’t be responsible for yourself, then you have no right to be upset when others are.”
Stiffening, Reese digested the fact that he’d spoken a full sentence to her for maybe the first time, and then she mulled his words over. It was on the tip of her tongue to tell him he could shove his apartment and this job right up his ass, but then what? Then she would be jobless and homeless once more. Whether she liked it or not, he did have power over her.
Reese’s lips were trembling, but she somehow managed to keep her voice steady as she said, “I’m not your responsibility.” “Sure about that? Seems like you are.” In this moment, Reese hated Leo Chavez.
Goodreads TBR Link: https://www.goodreads.com/book/show/23657398-smother 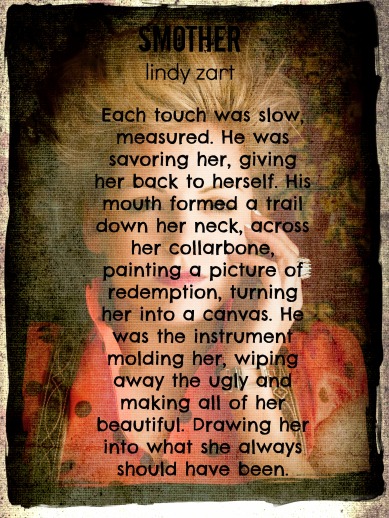 About the author:Lindy Zart is the USA Today bestselling author of Roomies. She has been writing since she was a child. Luckily for readers, her writing has improved since then. She lives in Wisconsin with her husband, two sons, and one cat. Lindy loves hearing from people who enjoy her work. She also has a completely healthy obsession with the following: coffee, wine, Bloody Marys, and pizza.
You can connect with Lindy at:
Listen to the playlists for Lindy’s books on Spotify.com
Get an eBook autograph from Lindy at Authorgraph.com
~* More Books by Lindy Zart *~
//ws-na.amazon-adsystem.com/widgets/q?ServiceVersion=20070822&OneJS=1&Operation=GetAdHtml&MarketPlace=US&source=ac&ref=tf_til&ad_type=product_link&tracking_id=ilo2re-20&marketplace=amazon&region=US&placement=B00AGBHEUC&asins=B00AGBHEUC&linkId=FXYXSGR7EXL5KZJ4&show_border=true&link_opens_in_new_window=true //ws-na.amazon-adsystem.com/widgets/q?ServiceVersion=20070822&OneJS=1&Operation=GetAdHtml&MarketPlace=US&source=ac&ref=tf_til&ad_type=product_link&tracking_id=ilo2re-20&marketplace=amazon&region=US&placement=1503345688&asins=1503345688&linkId=AZVA3NJHKQBYBRQ7&show_border=true&link_opens_in_new_window=true //ws-na.amazon-adsystem.com/widgets/q?ServiceVersion=20070822&OneJS=1&Operation=GetAdHtml&MarketPlace=US&source=ac&ref=tf_til&ad_type=product_link&tracking_id=ilo2re-20&marketplace=amazon&region=US&placement=B00A1UMC7I&asins=B00A1UMC7I&linkId=YATFO2EZVTLEUNYN&show_border=true&link_opens_in_new_window=true //ws-na.amazon-adsystem.com/widgets/q?ServiceVersion=20070822&OneJS=1&Operation=GetAdHtml&MarketPlace=US&source=ac&ref=tf_til&ad_type=product_link&tracking_id=ilo2re-20&marketplace=amazon&region=US&placement=B00MWJY90O&asins=B00MWJY90O&linkId=HGVVUPIUQB3TR34T&show_border=true&link_opens_in_new_window=true //ws-na.amazon-adsystem.com/widgets/q?ServiceVersion=20070822&OneJS=1&Operation=GetAdHtml&MarketPlace=US&source=ac&ref=tf_til&ad_type=product_link&tracking_id=ilo2re-20&marketplace=amazon&region=US&placement=1508622701&asins=1508622701&linkId=LTE64VUN6ITTLV3G&show_border=true&link_opens_in_new_window=true