Lexie Boggs has dealt with enough drama for one teenage girl, and just when she thinks it’s about over, the father who abandoned her a decade ago shows up looking for redemption. At least… that’s what he says. Ryan Parker thinks his future is set. He’s got a sweet job set up, graduation on the horizon, and a lifetime of dreams he’s planned with his girlfriend, Lexie—including a king-sized bed for their soon-to-be apartment. Only a slight snag tugs at the fantasy when Lexie starts putting aside all she’s worked hard on for her deadbeat dad and his “sickness.” Suddenly school is the only time spent together, and as Ryan expresses his suspicions about why Daddy Boggs is really back, Lexie pulls away, hoping Ryan is wrong but fearing he’s right. And as graduation approaches, Ryan and Lexie struggle to keep the futures they thought they had firmly intact from crumbling all over their now lonely king-sized bed.

Typically Alexis and Ryan’s story is the exact kind of romance novel where I would quote my mantra, “sometimes more of a good thing is too much,” because so often with books that aren’t something outside of fiction/romance (ie dystopian, fantasy, mystery, etc) we DO want to know what happens next, and then when an author delivers this on this desire the next book is just not as good or disappointing in some way (this has been my personal experience anyway.)  With The Beds Series this has not been the case, in fact I think that I liked this book, Lonesome Beds & Bumpy Roads, the most out of all three because while Alexis and Ryan still have issues and things to work through they have grown so much as individuals.  I felt that while things were hit and miss between the two of them through the whole book, they were communicating instead of shutting each other out.  They weren’t being very understanding of each other’s feelings the entire time – but they did come to realize that eventually.
I actually started out this series with the prequel novella, True Love and Magic Tricks, so I am always happy for scenes with  Kaylee and Nate as well; the four of them are a unit, and even though the series is over, in my mind I can envision their lives, marriages, and future kids (who will also be best friends,) – it’s like the ultimate big bow.  My favorite part of the Lex/Ryan relationship; the two of them are so sweet, funny and the biggest goofballs; the relationship between the two of them lack some of the extreme seriousness that is so popular lately, and was a breath of fresh air.  I relished their tickles, and teasing; the relationship felt so genuine and happy – and honestly, I had the “big goofy grin” throughout most of this series.  ( I LOVED the covers and all the teasers that reflected this part of them, they were simply the perfect representation).
Rated:  PG-13 – Cussing, and sexual situations (No descriptions of the actual act)
Genre: (m)YA – Fiction: Romance  (M = Mature, I kind of feel this series is pushing into the realm of NA in a lot of ways.)
Rating: 5 Stars

Cassie Mae (AKA Becca Ann) is a nerd to the core from Utah, who likes to write about other nerds who find love. Her angel children and perfect husband fan her and feed her grapes while she clacks away on the keyboard. Then she wakes up from that dream world and manages to get a few words on the computer while the house explodes around her. When she’s not writing, she’s spending time with the youth in her community as a volleyball and basketball coach, or searching the house desperately for chocolate. 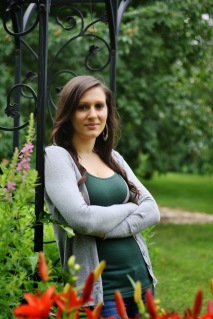 Theresa Paolo lives in the same town she grew up in on Long Island, NY with her long time boyfriend and their fish. Her debut novel (NEVER) AGAIN, a NA romance, released in Fall 2013 with Berkley (Penguin). (ONCE) AGAIN will release this summer. She is also the coauthor of the Amazon bestseller KING SIZED BEDS AND HAPPY TRAILS and BEACH SIDE BEDS AND SANDY PATHS, a YA contemporary series, under her pen name Tessa Marie. She has a hard time accepting the fact she’s nearing thirty, and uses her characters to relive the best and worst years of her life. She put her love of writing on hold while she received her Bachelor’s Degree in Marketing from Dowling College. When she’s not writing, she’s behind a camera, reading, or can be found on Twitter, Pinterest and Facebook.