The poverty stricken Reds are commoners, living under the rule of the Silvers, elite warriors with god-like powers.

To Mare Barrow, a 17-year-old Red girl from The Stilts, it looks like nothing will ever change.

Mare finds herself working in the Silver Palace, at the centre of

those she hates the most. She quickly discovers that, despite her red blood, she possesses a deadly power of her own. One that threatens to destroy Silver control.

But power is a dangerous game. And in this world divided by blood, who will win?

Review:
The Red Queen started popping up in my newsfeeds and emails a couple months ago, and despite the hype, mentally I was prepared to be disappointed. I was finding it compared to The Selection Series and Graceling, both books (series) I have read, and both of them I started out loving and ended up not very happy with them for different reasons.  Also, with big named publishers, books tend to get a lot of hype and advertismenet because of who is backing them.  What I’m trying to say is, I wasn’t buying into the hype.  I saw the book on my library’s Overdrive Ebooks list and thought it was at least worth a chance.
The Verdict??
I.want.to.own.these.books.  …and only the first book is out.
(Edited 4/21/14 – I DO own this book!) 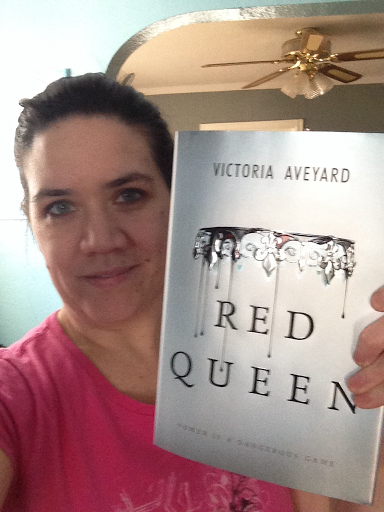 So, I can see the relationship to The Selection and Graceling, and I would add The Hunger Games in the mix too, because of the arrogant turning their noses on those who provide them basically everything.  The world building was absolutely excellent!  I didn’t feel lost or confused about what was going on or why.  I also really enjoyed that none of the characters were perfect, every last one of them had their strengths and flaws, making the story feel more believable.  This is a bit rare in dystopian type novels – usually at least one of the characters is unnaturally good at almost everything.  I did find that much of the book was predictable due to foreshadowing, so I really wasn’t surprised by much of the story at all.
If I were to pick a favorite part of the book I would say it would be all the conversations between Mere and Cal, and Mere and Maven (the Princes of the Kingdom); and how while the book was about the ruling class of super-humans and the normal humans living as a secondary slave class, both sides of the spectrum felt trapped and confined by their lives.  It really plays on the whole “grass is not always greener on the other side” concept, although there truly is a lesser more oppressed side.
The biggest downside of this series…. the wait for book 2 has begun!
Rated:  PG-13; Some Cussing
Genre: Young Adult: Dystopian, Romance
Rating:  5 Stars