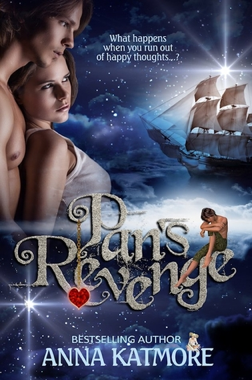 Genre: Young Adult – Fiction, Romance, Fairytale Retelling
Synopsis (From Goodreads): “Are you ready to be kissed?” he breathes against the corner of my mouth.

My knees start to tremble and there are butterflies in my belly now. Way too many. “I don’t think this is a good idea.”

“I think it’s the best idea I had in a long time.”

Desperate to leave Neverland and find his love in this notorious town called London, James Hook makes a grave mistake. He puts his own wishes above those of his half-brother and once-arch-enemy, Peter Pan.

The consequences alter Peter’s life in a way no one could have foreseen. The boy who wouldn’t grow up swears revenge, and what better way than by stealing Hook’s girl?

The first to arrive in London, Peter finds Angel once again without any memory of ever being in Neverland. That gives him time to plant the idea of a ruthless pirate captain in her mind—someone who tried to kill her once and is now on his way to kidnap her again. If only this stubborn girl would stop playing with Peter’s head. He’d completely forgotten how beautiful she was. Or is it only because he sees her through different eyes now?

Through a shower of falling stars, a loop around the moon, and then a hard left at the Clock Tower—when James Hook finally arrives in London, he has to fight with a vengeance for his love and face a boy who grew up after all…

Review:  Pan’s Revenge picks up right where Neverland left off.  Angel is back in her own time, and has no memory of her time spent in Neverland, outside of haunting dream-like thoughts based around the necklace that one of her sisters brought home.  Hook is stuck in Neverland trying desperately to figure out a way back to Angel.
What’s the Drama:  Pan feels betrayed, not only does he figure out Angel inadvertently told Hook where his treasure is located, but Hook tricks him into breaking the Time-Stop curse on Neverland and is now seeking his revenge – and the best revenge he knows is to hit Hook where it will hurt the most; Angel.
What I Loved:  The chemistry between Angel and Hook is still going strong.  I was afraid of a love triangle scenario, but we were blessedly spared from that! (THANK YOU, Anna Katmore!)  The entire time I was reading, all I could think is..please let them have a HEA!
The other thing I really enjoyed is the Fairy’s involvement in Hook and Pan’s life.  It might have been deceitful in a way, but  I liked that they were concerned about everyone getting what they needed/wanted.
Not so Much:  It’s really hard to view Pan in the light that he is given in this book.  I’m purposefully being vague, but die hard Pan-Fans may not like the book because of this.  You really have to let the book stand on its own and let the ending bring you a glimmer of hope.
Can my Kids Read This:  Yes.  There is some language, and a bit of sensuality, but other than that, it’s a pretty safe read.  And it’s loosely based off of a well loved story – so you know, they are going to WANT to read it!
Advertisement