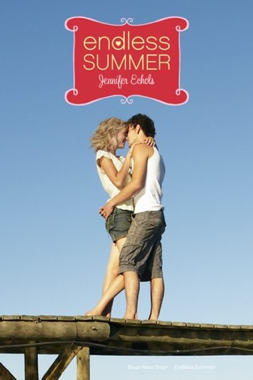 Lori can’t wait for her summer at the lake. She loves wakeboarding and hanging with her friends-including the two hotties next door. With the Vader brothers, she’s always been just one of the guys. Now that she’s turning sixteen, she wants to be seen as one of the girls, especially in the eyes of Sean, the older brother. But that’s not going to happen-not if the younger brother, Adam, can help it.

Lori plans to make Sean jealous by spending time with Adam. Adam has plans of his own for Lori. As the air heats up, so does this love triangle. Will Lori’s romantic summer melt into one hot mess?

Review:  Endless Summer is a duet of books that will capture your attention straight from the beginning.  It’s a summer romance on a lake, spending time with friends and working through normal teenage issues.  Two books, one story – so I’m doing the review as one.

What’s the Drama:  Lori is so excited for summer to have finally arrived because she now gets to try out her newly revamped teenage body on her long-time crush Sean.  In order to do so, she enlists the help of Sean’s brother and her summer best friend, Adam.  What she doesn’t know is that Adam might object….

What I Loved:  Oh the setting!  The fun of wakeboarding.  Just the idea of spending a summer working with your best friends, hanging out and just being outside the entire time.  Adam and Lori have something pretty good going on.  I love, love, love the “…or what” comments, and their secret handshakes.  They are cute and hot at the same time.

Not so Much:  I was getting very frustrated with Lori around the second book.  She really has a hard time learning from her mistakes in the worst way.  And when she and Adam get into trouble, despite it taking an entire book, it felt like Lori’s father was way too quick to recant and drop the punishment.  I was really hoping for a true heart-to-heart via father and daughter to work some of this mistrust and silliness out, but no.  I mean – yes he over reacted BIG TIME, but geesh.   I also felt like the military-school was a huge jump of a punishment, and the fact that Adam was constantly being blamed for things and the very little acknowledgement (by the parents especially) to at least apologize.  The ending was sort of dissatisfying in this way.

Can my Kids Read This:  Yeah, it’s a very clean book.  I mean kissing and such, but it’s a summer romance!