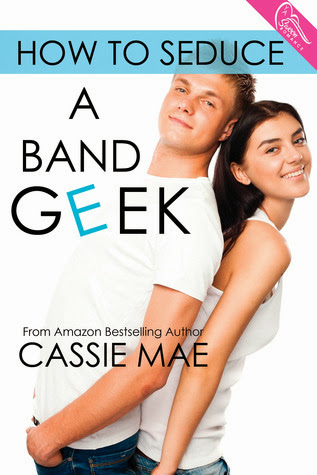 Title:  How to Seduce a Band Geek

Author:  Cassie Mae
Genre:  Young Adult – Romance
Synopsis (From Goodreads.com):  Sierra Livingston’s got it bad for her sister’s best friend, Levi Mason—the boy who carries his drumsticks in his pocket, marches with the school’s band, and taps his feet to whatever beat runs through his head. Sierra racks her brain for ways to impress the sexy drummer, but the short skirts and bursting cleavage don’t seem to cut it.

When Sierra gets paired with Levi’s sister, Brea, for a mentorship program, they strike a deal. In exchange for Sierra keeping her mouth shut about Brea ditching the program, Brea lets Sierra dig for more info on Levi to help get the guy of her dreams.

But when Sierra discovers Levi no longer plays the drums, his family has moved into a trailer, and he’s traded in his Range Rover for a baby blue moped, Sierra’s not sure if she can go through with violating his privacy. She’ll have to find the courage to ask him straight out—if he’s willing to let her in—and explore other ways to seduce the school’s band geek.

Review:  Cassie Mae is quickly becoming one of my favorite authors, if for no other reason than her books make me laugh, make my heart thump and the HEA’s just make me sigh.  In How to Seduce a Band Geek she tackles the social barriers again, this time with one of the schools rejects, and, though a “band geek,” one of those people who everyone loves to love.

What’s the Drama?  So you’ve got Sierra who deals with bullying every single day; being called a tease and worse because she wrecked a car into a tree in order to get out of having sex with her then boyfriend.  Then we’ve got Levi, the band geek who at one point would never been seen without his drumstick, but who is now known to be driving the streets at 4am on his moped and carrying around some strange black box.  Both characters are very obviously into each other (even if it’s not so obvious to them) but both are carrying burdens that may get in the way of what they want.

What I Loved:  Again the chemistry between Sierra and Levi is dead on.  Oh man the movie theater scene….  I also felt, where How to Date a Nerd lacked a bit of an example of ‘what to do when’ scenario, this one at least did follow through – cops were called in a scene.  So yay for (sort of) doing the right thing.  And Levi’s sensitivity, he’s really going through a rough time, and in a few scenes he sort of has a break down, but his vulnerability really made me like him so much more.

Not so Much:  How can I love and not love the same thing?  Well, as I said, the scene where the cops were called was at least a better example; however it wasn’t the best. Maybe it’s realistic that teenagers don’t tell their parents everything, and they naturally try and protect their friends; but clearly in this scenario Sierra knew what happened to her at an Ambien Party was wrong…so very, very wrong.  So why did she never talk to the police herself?  Why did she shut her mom down when she offered to talk.  Again, I know we are going for “what would really happen” rather than “what would happen” in books to make them more realistic, but wouldn’t it be good to give teenagers an example of what could happen if they did the right thing?  You prevent someone else from getting nearly raped, you stand up for what you know is wrong.  It’s not always a bad thing.  If you’re going to have these big, huge situations written in a book, I kind of feel like maybe they should be a big, huge situation.  Either there are good/decent consequences, ie; other girls come out of the woodwork who felt the same, there are bonds form, the offender gets in trouble; or consequences in the reverse; ie: the attempted rape happens again, someone gets seriously hurt/effected as a result of the party, etc.

I’m not saying that this whole topic needs to take on a force of its own, but it seems like it should have a bit more meat if it’s going to be present at all.

Can my Kids Read This?  Yes.  Once again, it is appropriate for High School teenagers.  The book, again, contains cussing, talk of sex, one drug party scene.  But I have to say this, all talk of sex was mostly about being not ready and how to deal with peer pressure.  And the drug party scene, Sierra had no idea what was happening until it was too late.  There was no glorifying of this type of atmosphere/behavior at all.