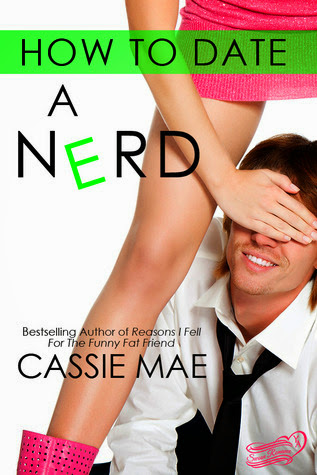 Title:  How to Date a Nerd

Synopsis (From Goodreads.com):  Zoe has a great pair of legs, perky boobs, and wears exactly what she needs to show it all off. She works hard for the easy sleazy ‘you only wish you were me’ reputation, burying who she really is—an all-out nerd.

The only time Zoe gets to be herself is when she hides under her comforter to read X-Men comics, sending jealousy stabs at everyone who attends Comic-Con. Keeping up her popular rep is too important, and she’s so damn insecure to care about the consequences. But when Zoe’s sister takes her car for a ‘crash and burn into a tree’ joyride, her parents get her a replacement. A manual. Something she doesn’t know how to operate, but her next door neighbor Zak sure as heck does.

Zak’s a geek to the core, shunned by everyone in school for playing Dungeons and Dragons at lunch and wearing “Use the Force” t-shirts. And Zoe’s got it bad for the boy. Only Zak doesn’t want Popular Zoe. He wants Geek Zoe.

She has to shove her insecurities and the fear of dropping a few rungs on the social ladder aside to prove to Zak who she really is and who she wants to be… if she can figure it out herself.

Review:  I love that Cassie Mae is tackling these side-groups in High School, the ones people tend to avoid or try and disassociate themselves from.  I’ve read so many young adult novels, and rarely do I see books written about them; I had even thought about writing one myself (even though I’m not an author – and even though I’ve got stuff rattling around up in my head, I never seem to really have much time to sit and try and get it out on paper).  So How To Date a Nerd is more about Zoe, and her issues with being a “closet geek” than it is about “how” to actually date a nerd.  Zoe loves all things nerd; Star Trek, D & D, Harry Potter, Lord of the Rings; you name it, she probably knows all about it.  However, in an attempt to stop being picked on, Zoe puts herself through a major transformation, sort of a la “Princess Diaries” style; showing up for High School completely reformed, totally hot, and absolutely NOT a geek.

What’s the Drama?  It’s been two years since her transformation, and Zoe is not happy!  And she has this absolutely, completely die-hard crush on her equally geeky next door neighbor Zak.  However, she can’t seem to sacrifice her spot on the top rung of the ladder to go after what she wants.

What I Loved:  Oh man, the dynamic between Zoe and Zak.  The innocence of shaky hands, and blushes.  I loved it!  And I’m pretty big into comic books/fantasy books/etc – so the references were really fun!

Not so Much:  MAN, Zoe is a jerk.  She is constantly beating herself up and then being the meanest person on the planet.  I understand her dilemma, really I do…but sheehs.  And then there was the attempted rape scene.  I would like to have seen that whole situation handled differently as an “example” for girls who have actually gone through something like this can look at and maybe follow….because ignoring it is NOT the right way to handle a situation like that, even if you escape…barely.

Can my kids read this?  Your mature High School kids, not your Middle Schoolers.  What you need to know is, they talk about sex, there is some alcohol, there  is cussing.  There is no actual sex in the book, however there was that attempted date rape sort of scenario.  The book isn’t real “heavy” at all though, very light, at times funny, and quite short.  Makes for a great lazy Saturday quick read (which is exactly what I did).