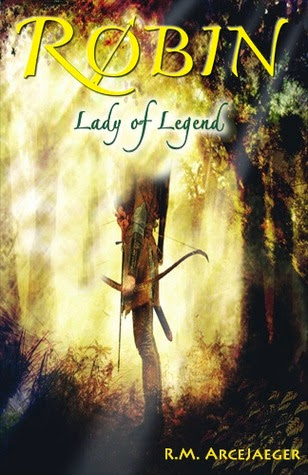 Synopsis (From Goodreads.com): What if Robin Hood wasn’t the man you thought him to be—what if he wasn’t a man at all?

Robin of Locksley is young, headstrong, and about to receive the worst birthday present of her life. Still struggling to define herself in a society that believes women are fit for little more than governing a household and bearing children, she balks at her father’s plans for her future, but the consequences of her rebellion prove deadly. Hunted by both her father and the Sheriff, Robin is forced to hide her identity and seek refuge as an outlaw in Sherwood Forest.

Disguised as a lad for protection, Robin maintains a careful isolation from the world around her…until she chances upon a young boy being beaten to death by the Sheriff’s soldiers. Her rescue of the youth marks the beginning of her leadership in Sherwood forest and of the unfortunates who seek refuge therein. Robin’s endeavors to provide a life of honor and purpose for her people while aiding the land’s downtrodden win her high esteem, but enrage the Sheriff of Nottingham, who plots a deadly fate for her and her band.

As the Sheriff’s traps close in around her and assassins seek to bring her down, Robin must risk losing love, leadership, and life if she is to save her people and fulfill her destiny as one of history’s greatest heroes.

Alive with adventure and danger, sword fights and heists, hatred and love, Robin: Lady of Legend is the never-before-told tale of the girl who became Robin Hood.

Review:  I love Robin Hood!  Just the entire idea of this fairy tale makes me smile.  Of course I’ve said this before in many of my past reviews.  I’ve recently reviewed Scarlet, and Lady Thief which is another Robin Hood series that I’ve been reading lately.  I’m pretty sure this book is a stand-alone though – so don’t think I’m getting you wrapped up in another three-year long series! (yes, even I am relieved sometimes when a book is…just a book!)  And though I always knew there were books depecting Robin as a girl, this the first one I have ever picked up.
I found Robin: Lady of Legend in one of those Amazon emails – Young Adult books.  This book was listed as a break through book, something like that.  Given that, and the good reviews,  I decided to give it a go.
What I loved:  I loved how the author worked in all the pertinant characters, and quirks and characteristics everyone knows and loves about the Robin Hood stories.  I especially liked how, though she was a girl, Robin came off as not only an inspirational leader, but she also had that quirkly, slighly sarcastic, witty personality.  Honestly, her dialogue is probably what I enjoyed the most about this book.  That, and the fact that despite the obvious, the author did not really change too much about the book.  (I, of course, kind of like the opposite when it comes to the Scarlet series, so apparently it doesn’t matter as long as the overlying theme is there!)  This light heartedness, and “merry-ness” is something I really, REALLY loved.  While the characters are oppressed, and outcast, they are happy and have found a life, and a sense of purpose in this book, which is kind of a relief from some of the other depections (books and movies alike).  They get angry, of course, and desire justice, but the book as a whole is not painted in this meloncholy light as others have been.
Another good point in this book is that while Robin is excellent, she was not completely and utterly awesome, the best ever ever! She was pretty humble, and even had doubts on her own abilities.  She had short comings, and needed help (though she wasn’t overly good at asking for it.)  She was a leader, so there was an air of arrogance, but it wasn’t overwhelming; in fact I loved her half-smiles of confidence when she knew her plan was unfolding just as she’d planned.  This, in my mind, makes her even stronger than the characters who just happen to be the best at everything and barely have shortcomings to speak of.
Not So Much:  I felt like this story got long in some areas, and in other areas I wanted more.  There is a bit of romance (which I will not reveal much about in this review), and I wish a bit more time was taken in formulating this side of the relationship.  A little passion, maybe?  I also would have liked to have seen more heists; stopping of the rich in the streets, etc.  We only were “there” for a few of them – although my favorite was when the sherriff himself was taken!
All-in-all, I did really enjoy this book.  It is very tame on the violence, and nothing inappropriate to speak of at all.  Very clean, and yet, entertaining.  Proving to the world that cussing, gory blood, drugs, sex, alcohol (oh wait…there was a bit of that!  But this IS a Robin Hood book.) really aren’t necessary to make a book entertaining!  I would allow even a younger teenager pick up this book, should they want!
Advertisement