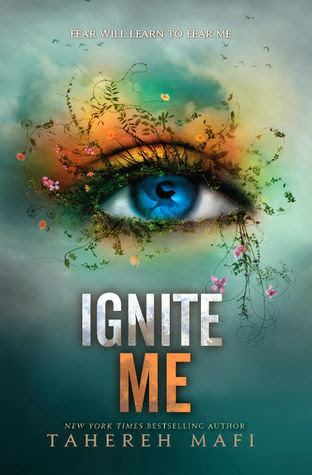 Genre: Young Adult – Romance, Dystopian, Fantasy
Series:  Shatter Me – Book 3
Synopsis (from Goodreads):   Juliette now knows she may be the only one who can stop the Reestablishment. But to take them down, she’ll need the help of the one person she never thought she could trust: Warner. And as they work together, Juliette will discover that everything she thought she knew – about Warner, her abilities, and even Adam – was wrong.
Review:  I’ve been meaning to write this review for a while now.  I probably finished the book a month ago, and you know…life.  Anyhow, first off, let me just say I really do love this series.  I’m about ready to go ahead reread all three again, just for the fun of it.  The story, and the characters were just so good.  I loved the premise; I mean dystopian meets X-Men, who wouldn’t?  I found myself drawn to read Ignite Me in a way that I haven’t really been experiencing as of late.  You know how it is…you put down the book because it’s been at least an hour, and you have kids and a husband to pay a little attention too, but twenty minutes later you find yourself right back in the same spot with the book again.  It consumed me more than I consumed it.
So yes, I loved Ignite Me.  Just loved it.  I love Tahereh Mafi’s writing style, and the characters she created.  I love the world – well, that’s relative; I love reading about the world, I wouldn’t want to live there though.  I especially loved learning a bit more about Warner, or Aaron rather.  It felt so indulgent to get so much background on him after the first 2.5 books, but I soaked it all in.  I loved that there was some emotional rollercoastering going on as well.  There were parts where I, myself, felt near to tears.  That’s good.  I like that.  As long as the main character didn’t die.  Then I don’t like that!  😉
There were, however, parts that I didn’t love so much.  It was more an aftertaste than anything.  Like when you start to drink something and it’s so wonderful that you finish it in that first taste, but then after you’ve sat there for a bit you discover that it wasn’t quite as good as you thought it was?  Hmm…that sounds a little harsh.  Let me elaborate….but first a warning, if you haven’t read this book and don’t wish to know details about it…stop here.
********************************************************************************************************************
So typically I’m all for the first guy that is presented as the love interest in a triangle such as this.  Perhaps it is because it is the first person that the author makes me fall in love with, and I hate the idea of this conflict of emotions.  However, after their encounter in Unravel Me, I knew Warner was the guy.  There was just something about him in that book, not to mention Destory Me,  that makes you just want him to win.  And then you start reading Ignite Me, and it is just reaffirmed over and over again.  Tahereh Mafi is an expert at writing these wonderfully delightful and passionate kissing scenes, and these tense moments between boy and girl that make your knees weak and your heart thump.  I’m sure this is a large part of her appeal as an author…(plus the superhumans!).  But then there is Adam.  Adam who was so wonderful in Shatter Me, and patient and loving.  And that shower scene!!!  He loved Juliette, that is so hard to forget.  When you start to read Ignite Me this is what you remember; the Adam who loves Juliette.  But what you get is a very angry, unrelenting, careless person.  I kept waiting on some kind of reconciliation (not for he and Juliette to get back together, but an acknowledgement of their behavior and the love that they did share).  I waited on him to be reasonable.  I waiting on his own happy ending. Something!  And you get tastes of things.  Maybe a new love interest?  (But no details.)  A fresh start with his new family?  (But no details.)  I felt so, incomplete without the second half of this book (at least I felt like he was the second half of this book from Shatter Me getting some kind of closure too.  It sort of drove me a bit crazy.
The other thing that kind of got to me was the ending.  Here we’ve worked up to this battle.  It’s been 2 (and then some) books now, and the struggle has been long and harsh.  So the time for the final battle has arrived, and not only does everything go almost exactly as planned, but Juliette walks in and although she does get lost on the ship, and has to battle with an unknown secret weapon, she easily takes everyone down and it’s done.  I was sort of waiting on the other shoe to drop.  Surely something is going to happen…nope.  Warner comes climbing up out of a pit, and they all live happily ever after.  The end.
In short;  I think, maybe perhaps…the third book was rushed.
Would I recommend this series?  Yes. I loved it.  For your teenager?  Eh, probably I don’t know.  The scenes are right on the edge.  And there is some sexual content….think Twilight, they work right up until that moment and…fade out, next scene.  So, that part of it is all implied.  But it’s still a mature book.
Advertisement