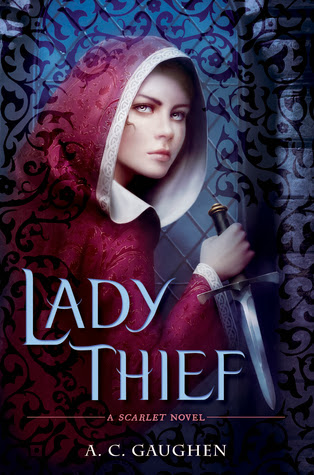 Author: A.C. Gaughen
Genre: Young Adult – Fairy Tale re-tell
Publication Date:  February 11, 2014
**I received an ARC from Netgalley.com.  Other than the joy of reading, I received no compensation for this review.**
Synopsis:  Scarlet’s true identity has been revealed, but her future is uncertain. Her forced marriage to Lord Gisbourne threatens Robin and Scarlet’s love, and as the royal court descends upon Nottingham for the appointment of a new Sheriff, the people of Nottingham hope that Prince John will appoint their beloved Robin Hood. But Prince John has different plans for Nottingham that revolve around a fateful secret from Scarlet’s past even she isn’t yet aware of. Forced to participate at court alongside her ruthless husband, Scarlet must bide her time and act the part of a noblewoman—a worthy sacrifice if it means helping Robin’s cause and a chance at a future with the man she loves. With a fresh line of intrigue and as much passion as ever, the next chapter in Scarlet’s tale will have readers talking once again.
Review:  I was so, so, so very excited to be granted access to read the ARC of Lady Thief.  I read Scarlet in 2012, and have been awaiting the rest of the series since then.  I love the story of Robin Hood, and am not surprised to love the re-telling of the story as well.
Scarlet left off after Scarlet saves Robin by marrying Lord Gisbourne, despite having come to realize that Robin loves her, and she him.  The drama that unfolds gave me flash back between Robin Hood movies I’ve watched and other books (mostly of a dystopian nature) I’ve read recently. Scarlet (Lady Marian) is a wonderful heroine, and maintains difficult yet loving disposition that was established in Scarlet.  This book is full of adventure, and revelation, and romance.  Oh the romance between Scarlet and Robin is wonderful, and exactly what you want to see from a classic Robin and Maid Marian.
The ending of this book is shocking, and in no way will give you flashbacks of of Disney foxes we grew up on.  And what would a good middle book be without one big whopper of a cliffhanger, eh?  It is totally worth it though.  The story of Robin and Scarlet has started to take on a shape of its own and I absolutely cannot wait for the next book already.
This book is suitable for young adults; high school age and above.  I would have no hesitancy in letting my 9th grader (if I had a 9th grader) read this book.  Well, there is violence, but only of the nature you would expect from a Robin Hood story.