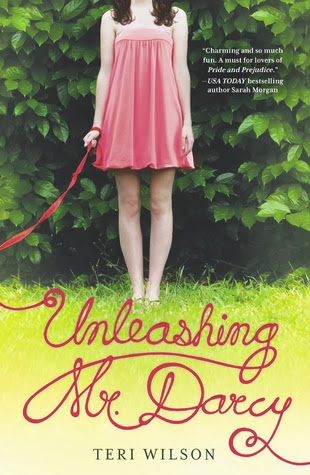 Publisher:  Harlequin HQN
Publication Date: December 21, 2013
Genre: Adult – Romance, Modernized Austin
**I received an ARC from Netgalley.com.  Other than the joy of reading, I received no compensation for this review.**
Synopsis (From Goodreads.com):  It is a truth universally acknowledged that a single woman teetering on the verge of thirty must be in want of a husband.

Not true for Manhattanite Elizabeth Scott. Instead of planning a walk down the aisle, she’s crossing the pond with the only companion she needs; her darling dog, Bliss. Caring for a pack of show dogs in England seems the perfect distraction from the scandal that ruined her teaching career, and her reputation, in New York. What she doesn’t count on is an unstoppable attraction to billionaire dog breeder Donovan Darcy. The London tycoon’s a little bit arrogant, a whole lot sexy, and the chemistry between them is disarming. When passion is finally unleashed, might Elizabeth hope to take home more than a blue ribbon?

Review:  I’m a sucker for Jane Austin re-makes.  Especially Pride and Prejudice.  It’s my favorite Austin novel, as well as my favorite movie of all times!  So it is always hard to pass up a modernized version.   I recently found the mime below on Pinterest, which is about 99% truth.  (I tested it, asked my husband, “Do you know who Mr. Darcy is?”  The answer was no.  Which is surprising, since I watch the movie at least once a quarter.  Or at least every time I pick up a P&P remake.  It took everything in me not to put down this book and put in the movie this time around. 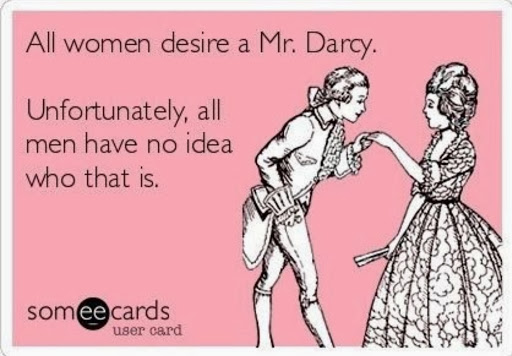 And there you have my review.  Sort of.  The modernization was good enough.  It centered around the dog show arena and of course the rich and…not-so-rich.  The book included plenty of Darcy, and Elizabeth moments, many of which avid fans will recoginize either from the book or by the movie.  In fact, many of the key phrases from the book were utilized here.  Elizabeth, true to the original, was a master of misunderstanding Darcy, but in this version it was almost to a fault.  In fact, I think that both the pride and the prejudice fell to Elizabeth most strongly in this rendition.  Mr. Darcy was constantly putting his foot in his mouth, and more than once I felt that Elizabeth’s responses and disdain were uncalled for.  I got a bit frusterated with her refusal to hear Donovan Darcy out, and if I were him, I most certainly would have given up on trying after so long.  Mr. Darcy was charming and compassionate and understanding.  He was apparently quite handsome, although for some reason I had a hard time picturing this particular Darcy in my head.
The dog shows, while the common ground between Elizabeth and Darcy in this book, were really a rather small part of this novel.  I did enjoy the the bits that were there, but I think when I requested the book part of me had actually hoped on a few funny scenes and dog antics, but other than a scene of a dog peeing on beautiful carpet there really wasn’t any thing like that.  I guess they were show dogs, and were trained to absolute perfection.
While I guess I didn’t LOVE, love this book, I still always enjoy an Elizabeth and Darcy rendition, in its (at this point) many varieties.  I love the different interpretations of the brooding, overly-handsome Darcy, and Elizabeth’s fumbling of the relationship.  If you’re an Austin fan, and enjoy modernizations, I see now reason why you wouldn’t enjoy this novel.
Advertisement