Seeing Light
The Seraphina Parrish Trilogy # 3
Genre- YA Fantasy/ Time Travel
Publication Date- October 10th, 2013
As the corruption of the Society intensifies and the questions surrounding her mother mount, Seraphina Parrish embarks on a journey to find Terease in the terrifying Wandering city of Nocturna. But the information she learns there only sends her team on a dangerous mission to fulfill an ancient prophecy. Delving deep into the disturbing secrets of their world, the revelations quickly unravel, revealing shocking truths about the Society and Sera’s life. In the end, power and courage clash in a mission for freedom that may shatter the Wandering world completely.

Review:
Seeing Light is the dramatic conclusion to the Seraphina Parrish trilogy, and using the word “dramatic” is not an understatement. All along author Michelle Warren has been setting us up for a roller coaster ride of a finale. A few things ( that I won’t diverge) I saw coming, others caught me completely by surprise. If you’ve been reading the series all along, you will not be disappointed with this conclusion. If you haven’t been reading this series all along, it’s worth your time (and money – as recently Wanderdust has been free…how much better can it get?)

In this world of wanderers, seers and protectors, from the beginning things have never been exactly what they seem. Seraphina continues to discover and rediscover this fact over and over again in Seeing Light. The story moves forward and the world I have grown to enjoy continues to bend toward the untrustworthy and deceitful. This is okay, because, true to her nature Seraphina is going to figure out this entire mess. I liked this entire series because the growth of Seraphina as a character is obvious. She has learned from her past mistakes and moves forward with life. There is no unnecessary angst, but there is rightful mourning. Often times the main characters of these books shows no real growth throughout her story – and that can be incredibly frustrating as a reader. Mainly in the area of her team, the more she learns and understands truths about herself, the more she relies and leans on her team for support. This shows true character.

Of course, as you all know, the dreaded love triangle reared it’s ugly head again in this series. I’m only eluding to it because I want to say – the result was partially satisfying. I’m afraid you may not have read this entire series and don’t want to give anything away at all – however I will say that Michell Warren takes you on a bit of an emotional tug and pull and I for one was happy with the ever after!

The ending to this story was just as you would want it. There are really no questions left unanswered. No real reason to continue on with the series (although a spin-off wouldn’t be undesired). Satisfying in a way that some more popular books of recent have not left me. 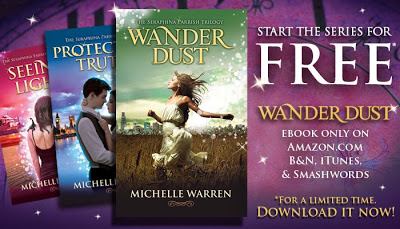 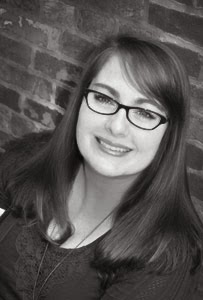 About the Author-
Michelle Warren is the author of the Seraphina Parrish Trilogy. She didn’t travel the road to writer immediately. She spent over a decade as professional Illustrator and designer. Her artistic creativity combined with her love of science fiction, paranormal and fantasy led her to write her first YA novel, Wander Dust. Michelle loves reading and traveling to places that inspire her to create. She resides in downtown Chicago, not far from her imaginary Wandering world.